The one thing I have to accomplish—or I won’t be able to live with myself—is to be a traditionally published author. I know. It makes no sense in so many ways. Yet this is the rainbow bridge of my dreams.

Because life isn’t always about making sense. It’s about living without regrets.

I came close to my goal with the book I queried late last year.  But close isn’t good enough. I realized a little (?) too late that the story, while good, wasn’t unique enough for a debut author. No worries. I’ve heard of a number of now-published authors who didn’t make it out of the gate with their first book. Then when they sold their second book, the first was sold too. That’s the success scenario I choose to believe in.

So…  Now it’s time to kick up my game with a new project that has a unique concept. It’s time to dig in and get serious with the infamous First Draft.

Pounding out a first draft is different for every author. For some,  the words flow out of their fingers like milk and honey in the promised land. Yeah, right. So. Not. Me.

For me, a  first draft is all-consuming. It’s when the characters blossom to life in my head, transforming into three-dimensional people. Usually with a healthy dose of attitude. Story wrinkles slap me in the face—plot pits big enough to swallow a T-Rex whole—I didn’t foresee in the initial planning phase. It’s a fictional wrestling match and dance party rolled into one, an oxymoronic medely of inspiration, frustration, and a high flying creative dopamine rush.

Yes, folks. The writer’s high is real. And it’s free for anyone crazy enough to venture down this path.

I’d like you to think that my First Draft Dash is as fluid as an Olympian going for the gold. But let’s be real. My first draft process looks a lot more like this… 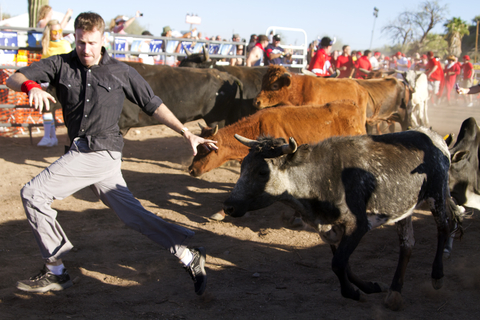 In the race to keep the momentum flowing, real-life stuff falls off the truck, only to be trampled beneath the hooves of those bulls.

Dust, dishes, and laundry be damned… and the better part of social media too. 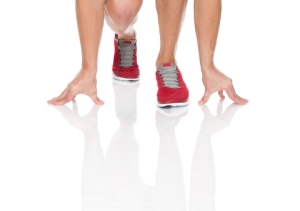 The good new is, first drafts don’t last forever. In fact, this is going to be a relatively short sprint.

Head down and fingers to the keyboard on March 21st.

Meanwhile, back at the ranch…

Yeah… about this blog…

During the first draft dash, I won’t have the bandwidth to come up with thought-provoking posts on a regular basis. In February, when I was plotting out the new project, I did Zip. Zero. Zilch blog posts.

I didn’t want this blog to go dark for the next three months, so I’m bringing out a series I’ve been thinking about for some time. It will be based on a series of letters written to me by legendary Disney animator Frank Thomas over a number of years. The correspondence originated out of my love of animation and computer graphics, but ultimately brought me to the path of writing fiction for young readers.

Coming up next:
“Letters from Frank ~ Insights on Animation, Computers, and Elephants”

This past year was a whirl wind of firsts, including a new job and blogging for the first time ever. I also started the final revision of my Work In Progress (WIP) — a Young Adult (YA) supernatural mystery. All good. It’s been terrific, really. 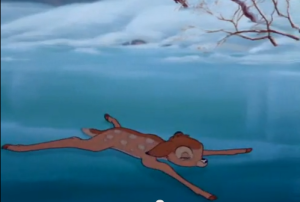 But… there was an itsy-bitsy snag  in the midst of the newness. With all the new shiny things in my life, progress on my WIP revisions slowed to a negligible crawl. Which is why come November, when everyone else was NaNoWriMoing, I lead a NaNoRevMo Charge on revisions for my WIP.

It was great tapping into the NaNo synergy. I got back in the groove, and the revisions were going well.

And then … life happened. What’s that they say about “making plans is the best way to make the universe laugh. In your face.”? Well, the universe was rolling around on the floor laughing at me…

Well… ALMOST… I won’t bore you with the deets, but here’s the general rundown:

I’m back in the groove & skating on through…

I’ve sailed well past the half-way mark of the WIP revisions, and can actually see the light at the end of the tunnel. Yay, me! Since I’m driven by deadlines, real or self-imposed, to keep the momentum going I drew a deadline for final completion on the calendar. Then I started realigning priorities. I’m confident I’ll be able reach the finish line in a relatively short time. But that means … something’s gotta give.

Sadly, this blog has to go dark … for awhile

Only for a few weeks folks… And  that’s not to say I won’t post a funny video somewhere along the line. *wink, wink* Just no substantial content, as I need to focus my full attention on my WIP revisions … for now.

I’ll be back after the revision break. Promise!

I have a great series of posts planned for the coming year. But before I can dig into

writing those awesome articles, I have to finish this WIP, so I can hop on the Literary Agent Submission Train.

I’ll see you all in a few weeks on the other side of the deadline! I’ll miss you guys, but this Revision Interlude will pass before we know it! [Image credit: Wikipedia]

I hate to admit it, but I was. Stuck on the infinite spin cycle of life, that is. Then I realized that we’ve all been there. I mean, who hasn’t been stressed out, not knowing *how* we’re going to pull everything off without a hitch … and giving up is so NOT an option?

Yeah, I thought so. Because that’s pretty much life. In this decade anyway.

But instead of wallowing in self-pity, I decided to do something to pull myself into a positive frame of mind. Hence this post. And during the process of writing (which did the trick by the way!), I remembered a few sure-fire tricks for turning my perspective around.

1. We may not have control over *what* happens, but we do 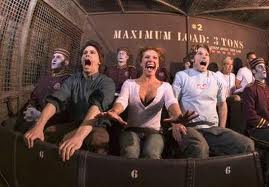 have control over *how* we react to the situation. We can be freaked out, or we can do the best we can, then let go and enjoy the ride.  (Photo Credit – Walt Disney’s Tower of Terror)

2. Not to go all Pollyana … but making a list of things you’re *glad* about totally helps. I know. It sounds trite, but by the fourth item I’ve stopped focusing on the things that aren’t right and start seeing the things I’m grateful for.

3. When life kicks it up a notch, from spin to heavy-duty agitate, try watching an intense action film … like DIE HARD. The characters in those movies are always having a much worse day. Unless you’re outsmarting trigger-happy terrorists, crawling through disgustingly dirty air ducts, and running over broken glass in your bare feet … I’m thinking your day is GREAT compared to John McClane’s (Bruce Willis in DIE HARD).

4. Break out of your routines and do something extraordinary, maybe even succumb to downright silly fun.

5. Remember that the first rule to being happy is not to sweat the small stuff. The second rule is to realize that it’s all small stuff! 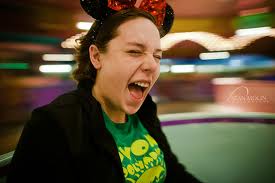 A wise person once said that “if everyone tossed their troubles into a hat, you’d be the first to pick yours back out.”

So what’s it gonna be … Tea Cup ride or Tower of Terror?  (photo credit Sean Molin) 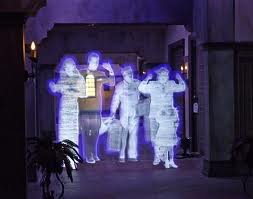 Because when you get right down to it … it’s all about perspective.

What tricks Do you use to keep a positive outlook?