Rich in imagination & deep in character…

The people of Albion are different from anyone Jessamin has ever known: harsh, upright, and obsessed with wealth and rank. Jessamin knew as much when she left her sun-drenched island home to attend school in their gray, dreary country.

But she had no idea how different they truly were.

She never thought she would discover a house with door that open onto a hundred corners of the city or a book that spends its days as a bird. She certainly never expected to become a pawn in a political and magical power struggle between the sinister Lord Downpike and the handsome, charming Finn Ackerly. And she never so much as imagined she’d win Finn’s affections—or that one day his shadow would follow her every step.

Fortunately for Jessamin, fate has other ideas… (jacketflap)

If I had stayed on the thoroughfare that day, not taken the alley, I would never have met him. … I sit, defeated, and shuffle the cards for the hundredth time. I cut the deck, close my eyes, and draw a card at random. FATE. I always draw fate.

Magic, romance, intrigue, and a dash of steampunkery…

Jessamin swept me into her fictional 19th century world and immediately won me over with her sharp wit and strength of character. At the age of sixteen she left her tropical island home for a distant country, so she could better herself with an education she helped earn working as a servant in a hotel.

Jessamin’s meager finances put her at the bottom of Albion’s high-society caste. To make matters worse, her darker skin label her as a foreigner, making her even more of an outcast. Jessamin works hard to be the best in her classes,and getting little recognition. Still, she’s proud of holding her own. That is, until the fateful day Albion’s magical forces catch her up in their vicious snare. Strong spirited Jessamin fights back, battling her wits against evil magic, proving her island moxie is something to be reckoned with.

Why this book rocks…

ILLUSIONS OF FATE is flat-out fun–Witty dialog and scenes crafted with style and polished prose. I highly recommend this beguiling story to any young adult, or adult who is young at heart.

Here’s a few reasons why this book is so awesome:

To win an author signed copy…

NOTE: The FREE giveaway of an author copy of this book is open to residents of the United 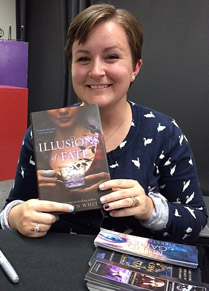 States only, due to shipping costs. My sincere apologies.

Here’s how to enter to win:

I’ll announce the winner on this blog Saturday, November 22nd.

May Fate be with you!