There’s a glorious full moon tonight … a marvelous night for a moonwalk. No, not on the surface of the moon … the dance move Michael Jackson made famous in

For anyone who’s too young to remember Michael Jackson, or is just unfamiliar with the illusive dance technique, the moonwalk — when done well — creates the illusion of the dancer sliding backwards while attempting to walk forward.

But just like the moon in tonight’s sky, the moonwalk was around long before Michael Jackson…

Who invented the Moonwalk?

Proof-positive recordings only go as far back as recording technology. I, however, wouldn’t be surprised if the moonwalk originated centuries before the first film recording. Anyway…

Here’s what we know for sure:

Cab Calloway, the famous jazz singer and bandleader, was recorded moonwalking back as 1932. Calloway is noted to have said that back in the 1930s, the dance move was called “The Buzz”. 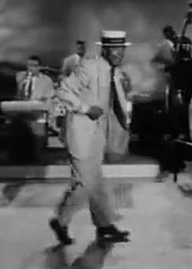 Americans weren’t the only ones to incorporate the enigmatic dance move into their routines. The famous French mime, Marcel Marceau, used the moonwalk throughout his career, starting in the 1940s. In Marceau’s famous “Walking Against the Wind” routine, he moonwalked as he pretended to be pushed backwards by a gust of wind, as he tried to walk forward.

There were more contemporary performers, such as David Bowie, who performed the moonwalk before Michael Jackson busted the move on MTV in 1983. Still, there’s no question that Michael Jackson was the one who made the moonwalk famous for our generation, and a few more to come.

Pretty awesome. The first time I saw that move I thought, “I want to learn how do that!” And now, with the help of YouTube, we CAN!