A Workshop with Henry Winkler and Lin Oliver

This year’s SCBWI Summer Conference in Los Angeles (August 1-5) was the ultimate blend of inspiration, guidance, and professional advice for children’s authors and illustrators. All the workshops were amazing, but one was particularly memorable for its advice and inspiration: Comedy Comes from the Heart, with Henry Winkler and Lin Oliver. 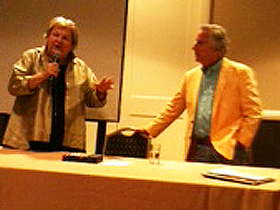 Henry Winkler and Lin Oliver are two of the funniest people on the planet. Put them together in the same room and it’s no wonder things spiral virally into the hilarious.

This dynamic duo teamed up to write 17 books in the Hank Zipzer: World’s Greatest Underachiever series, and have completed four books in the Ghost Buddy series. They are both are hilarious, and they know how to translate that humor onto the written page. You can read my review of Ghost Buddy ~ Zero to Hero here.

The Do’s and Don’ts of Writing Comedy

Henry Winkler and Lin Oliver earned their Fabulously Funny street creds on the page as well as the screen. They know what works, and what doesn’t, when it comes to comedy. Here are some of the comedic secrets they shared with us:

Henry Winkler embellishes an explanation for the audience [photos by moi]…

The following advice from Henry Winkler was particularly inspiring:

For information on some of the other amazing workshops at the LA13 SCBWI Summer Conference, you can read the official SCBWI blog.