We might think of the bus-like bookmobiles as modern inventions, but they were not the first mobile libraries…not by a long shot. The first bookmobiles were little more than carts powered by hooves. There has even been a Pony Express style book delivery program known as the Pack Horse Librarians.

The first documented mobile libraries were carts filled with books drawn by horses. 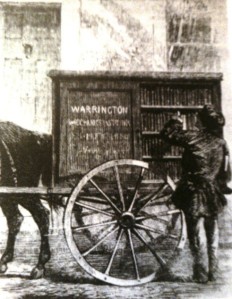 The perambulating libraries operated in rural England as early as 1857. Warrington, England introduced a horse-drawn van in 1858 that was operated by the Warrington Mechanics’ Institute, to increase the lending of its books. [PC: Wikipedia]

In 1890, Fairfax County, Virginia got on the mobile library wagon (literally) in the northwestern part of their county. But one of the most memorable mobile libraries was a product of the Great Depression. 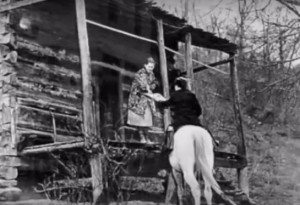 The Great Depression threw the entire nation into poverty, and the already poor rural areas suffered the worst. Kentucky was one of the states hardest hit by the paralyzed economy.

We humans seem to show our best when things are at their worst. Such was the case with the first Pack Horse Library, formed by the Work Progress Administration (WPA) in Leslie county, Kentucky. This new project brought reading materials to those who lived in the remote rural areas of Eastern Kentucky, an area with little electricity and fewer roads.

Unlike most New Deal programs, the Pack Horse Plan was fueled by the support of

local communities. The only way to get books to the people living in the remote mountain areas was on horseback, and the Kentucky women didn’t shy away from the challenge. The Pack Horse Librarians mounted mules and horses with panniers filled with books and headed out into the hills.

Each Librarian made deliveries at least twice a month, covering over 100 miles a week on horseback. The Librarians took their jobs as seriously as the mail carriers, riding miles through inclement weather, across backwoods wilderness terrain.

I could go on and on about the great work done by the Pack Horse Librarians, but you’ll enjoy watching the following mini (approx. 3 min.) documentary much more.