Richard Peck was an influential voice for me when I started writing for young readers, and with good reason.

He was a National Book Award finalist TWICE, as well as claiming the Newbery Honor (A Long Way From Chicago) and Newbery Medal (A Year Down Yonder). Richard Peck was nothing short of a master and commander in the art of writing for young readers.

Before becoming an author, Richard Peck was a teacher. His classrooms were filled with the young audience he’d later write for. He admitted that, “Junior-high teaching made a writer out of me.” Peck may have left teaching, but he never stopped sharing his wisdom.

I was fortunate to have heard Richard Peck speak at a couple of Society of Children’s Book Writers and Illustrators (SCBWI) conferences. SCBWI even recorded a video Masterclass with Richard Peck on writing the novel for young readers too, that you can purchase for a reasonable price.

Richard Peck shared his wisdom on craft  through essays, as well. The essay he wrote on importance of beginnings—October/November 2006, Horn Book Magazine sparked a writing epiphany for me. In it he said, “The most important secret of writing . . . you are only as good as your opening line.”

At first I thought that was kind of harsh, so I did extensive research. I went to bookstores and libraries, reading ONLY first lines of books. As it turned out, he was right! The books with great first lines I took home and read.

Don’t confuse a great opening line with over-the-top drama, though. A great opening line shouldn’t be about shock-value. When done right, it sets the tone of the story, reveals character, conflict, and theme. It’s the promise of the premise…distilled into one line. Richard Peck would revise his first chapter 24 times (or more), well after he’d completed the manuscript, to make sure it was right. 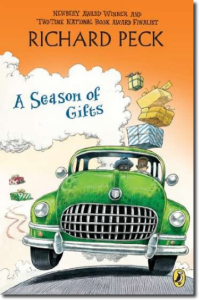 Short stories comprised Richard Peck’s first published works, covering the gamut of comedy, tragedy, historical, and contemporary. In fact, his short story “Shotgun Chentham’s Last Night Above Ground” was the inspiration for his Living in Chicago series: A Long Way From Chicago, A Year Down Yonder, and A Season of Gifts.

Peck’s collection of short stories, Past Perfect, Present Tense includes insights and advice for aspiring writers, along with some of his own notes. In the introduction, Peck reminds us that “fiction isn’t real life with the names changed. It’s an alternate reality to reflect the reader’s own world.” He also warns burgeoning writers that “a short story isn’t easier than a novel.” In truth, short stories require a type of samurai self-editing that is not for the weak of pen or faint of heart.