Film and fiction bring their own strengths to storytelling. The secrets behind The Pentagon Papers requires both to fully understand the people and events that shaped this turning point in American history and culture.

Most Dangerous, by Steve Sheinkin, reveals the how and why The Pentagon Papers were stolen and released to the press by Daniel Ellsberg. The Post (starring Tom Hanks and Meryl Streep), is the story of the Washington Post’s role in exposing the lies behind the Vietnam war to the American public.

Most Dangerous, by Steve Sheinkin

Daniel Ellsberg and the Secret History of the Vietnam War 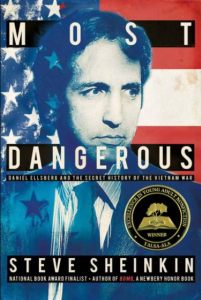 Daniel Ellsberg was the obscure government analyst who became “the most dangerous man in America” by risking everything to expose decades of government deception and lies.

The Pentagon Papers—the top-secret history of the Vietnam war—had been kept under lock and key for over a decade, with only the highest ranking government officials aware of their existence. On June 13, 1971, the New York Times blew open the government’s tightly kept secret, exposing The Pentagon Papers to the American public and the world. Secretary of Defense Robert McNamara had documented the government’s actions in the Vietnam War, revealing lies that spanned four presidencies. Sheinkin’s page-turning narrative provides direct insight into the people and political events that brought Ellesberg—a self-proclaimed patriot—to commiting what many would call treason. Sheinkin interviewed Ellsberg and others who were involved in shining the light of truth on The Pentagon Papers. The result is a front row seat to what the New York Times deemed “the biggest story of the century”, as if you are experiencing it unfold in real-time. Thought provoking and emotionally stirring, Most Dangerous delves into the true meaning of patriotism, freedom, and integrity.

Sheinkin’s insightful investigation of The Pentagon Papers was the 2015 National Book Award finalist and winner of the 2016 YALSA Excellence in Nonfiction Award.

The Post, in comparison, focuses on the unprecedented battle between the press and the

government regarding the right print The Pentagon Papers. Katharine Graham, the country’s first female newspaper publisher and her hard-driving editor Ben Bradlee were the force behind bringing the truth behind the Vietnam war to the American people.

The Washington Post’s legal team advised Graham against publishing the stolen documents, as Nixon would surely slam them with criminal charges. If they lost the legal battle, Graham risked destroying the newspaper that was her family legacy. If they won, she’d the Post would become a national journalistic institution. She was a fighter. She ran the story.

The White House retaliated with full force, and the Post and Times went before the Supreme Court to plead their First Amendment stance. Newspapers across the country rallied the story in solidarity, and the court ruled in favor of the newspaper and the people’s right to know.

Meryl Streep’s performance provides a movingly nuanced reflection of the societal inequality professional women of the time faced. For this reason, The Post is as much a statement about the turning tides of equality as it is about freedom of the press and the American people’s right to know.

The 2014 Oscars were last Sunday evening, March 2nd. If you don’t live in a cave, you probably heard about Ellen DeGeneres’ Oscar selfie that broke Twitter.

If you just came out of your cave and missed all that action, you can get the deets from the Los Angeles Times article about the event here and the New York Daily News article here.

One Message ~ Over 2 Million Retweets

Long before midnight that night, Ellen’s selfie was retweeted more than 2 million times. The overwhelming influx of network traffic brought Twitter to its knees. Or, to use a highly technical term, “they were hosed”. So much so, that Twitter later sent out an apology regarding the 20 minute disruption in service that happened after 8 p.m. PST.

Why it’s a big deal…

People who don’t use Twitter don’t get how big this is, both on a technically and humanly—the way we work and live.

I’ve been a technical writer in the software industry for a number of years, and have been exposed to a broad range of technologies in some of the most influential companies in Silicon Valley. Twitter, and other high-profile companies that provide real-time services, have substantial server farms to compensate for traffic during peak times. Nothing short of World War III should bring them down.

But something else was remarkable about this phenomenon. It shone a lantern on how Twitter affects the way we interact and communicate as a society.

One message shared over two million times because it resonated with a population, is nothing short of amazing.

This says something powerful about instantaneous connectedness. How the world is a global community in which we share thoughts and ideas in a fraction of a second. More important, how much we have come to depend on this ability.

I was one of the many who live tweeted through the 2014 Oscars broadcast, talking with people across the nation and around the world, retweeting and replying to tweets. I experienced the “Twitter crash” in real-time, the frustrating sudden loss of being able to communicate with other tweeters.

The retweets-heard-round-the-world from Ellen’s single tweet demonstrated our power as a collective whole. Because at the end of the day, technology is nothing without us—the people who drive it.

How does technology affect the way you communicate and live?