I don’t mean to dis the holiday season. But let’s get real. 85% of all families are dysfunctional, in one way or another. For many the holidays can be as much fun as walking on broken glass. Before you’re tempted to string yourself up with those Christmas lights, try a tradition guaranteed to chase away the holiday blues. Put some FUN back in dysFUNctional holidays with these awesome films…

A New York City cop gets trapped in a Los Angeles high-rise occupied by terrorists on Christmas Eve.

Yes, I’m serious. The original Die Hard movie is one of my favorite holiday movies, for the following reasons:

of Dulles International Airport in Washington, D.C. and save his wife Holly who is on one of the planes attempting to land.

Yes, this is my second favorite holiday movie. Which I usually watch right after the first Die Hard movie. Gotta  keep the adrenaline pumping. 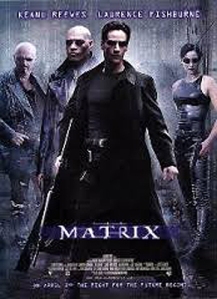 I’m only going to recommend the first Matrix movie. The other two felt overdone (story-wise), in my humble opinion. But you go ahead and watch all three, if you need the escapism. Here’s the synopsis for the first in the series:

In the near future, a computer hacker named Neo discovers that life on Earth is nothing more than a virtual reality — The Matrix — created by intelligent-machines, so they can farm our life essence and dominate the “real” world. Neo joins like-minded Rebel warriors Morpheus and Trinity to overthrow The Matrix.

What’s so great about that, you ask? Take the red pill and I’ll show you:

When Vianne (Juliette Binoche), a mysterious stranger, and her child arrive in a tranquil French town in the winter of 1959, nobody expects the impact she and her daughter will have on their community which is stubbornly rooted in tradition. Vianne has the audacity to open a very unusual chocolate shop right across the square from the church. Then her unusual ability to perceive her customers’ private desires and satisfy them with just the right confection coaxes the villagers to abandon their straight-laced ways.

The resident nobleman and self-appointed leader of the town fears Vianne is ruining his town, and forbids anyone from entering her shop. He is hoping to put her out of business, and drive her away forever. And it almost works. But the handsome gypsy, Roux (Johnny Depp), arrives and joins forces with Vianne to liberate the town. A dramatic confrontation ensues, ultimately changing the town, and the people’s hearts, for the better.

This movie’s magical charm is just as powerful as kickass-badass. Here’s why:

Right before Christmas, shy New Orleans cookware sales clerk Georgia Byrd (Queen Latifah) receives the news that she has less than a month to live. This harsh reality causes Georgia to rebel against her timid life. She hops on a plane, jetting off on a dream vacation, living like there’s no tomorrow — because for her there isn’t.

Georgia succeeds in shaking up a glamorous European resort spa, commanding the attention of senators and hotel staff alike! LL Cool J, Georgia’s handsome suitor in New Orleans, chases after her for a surprise happy ending.

For those of you who read last year’s — more politically correct — 5 Get-in-the-Holiday-Mood Movies post, you’ll remember this movie was on that list. This is not a mistake. This movie deserves to be on both lists. Here’s why:

Do you have any movies to add to this list?

I don’t know about you, but there’s a set of movies I like to watch at time this year to help me get in the “holiday mood.”  Today I thought I’d share some of my not-so-typical holiday favorites, in case you’re looking for new sparkle to make the season bright.

Right before Christmas, shy New Orleans cookware sales clerk Georgia Byrd (Oscar® nominee* Queen Latifah) receives the news from her doctor that she has less than a month to live. The reality forces Georgia to rebel against the timid life she’s lived, and jetting off on a dream vacation, living like there’s no tomorrow (because for her there isn’t). Georgia succeeds in shaking up a glamorous European resort spa with her new let-loose attitude, embracing a new look … new moves … and commanding the attention of senators and hotel staff alike! LL Cool J, Georgia’s handsome suitor in New Orleans, isn’t about to let Georgia slip away, and chases after to a surprise happy ending. Timothy Hutton, Gerard Depardieu, Alicia Witt and Giancarlo Esposito have rollicking roles in this comedy that’s deep with meaning and big with heart.

This movie delivers on the laughs, but it’s the lessons that keep me watching it again every year. It’s a great reminder about what’s important in life … especially how to live it well.

[This movie is available on Netflix, as well as on Amazon for a very reasonable price (under $10.00).]

2. “The Family Man” with Nicholas Cage

Jack Campbell (Nicolas Cage) is king of the Wall Street sharks, scoring killer deals by day and cavorting with escorts by night. He “thinks” he’s happy, but his life of empty luxuries is turned inside out on a lonely Christmas Eve when a gun-packing punk (Don Cheadle)–an angel in disguise–responds to Jack’s altruistic gesture by giving him “a real-life glimpse” of the life he could have had. That is, if he’d married the girlfriend (Téa Leoni) he abandoned 13 years earlier, raised two adorable kids with her, worked in his father-in-law’s retail tire outlet, and lived in suburban New Jersey. Living this “glimpse” of the path not taken—Jack is an Armani-man in a Sears-special world—wondering if he’ll ever get back to luxurious life of callous wealth, or if he even wants to.

This story pulls back the covers on a high-rolling materialistic lifestyle and compares its emptiness with the fulfillment of an average working-class family. Without being preachy, this story conveys what really matters in life.

3. “The Bishop’s Wife” with Cary Grant 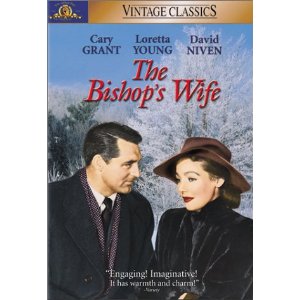 It’s Christmas, and the Yuletide spirit has yet to warm Bishop Henry Brougham’s (David Niven) Victorian home. Struggling to raise funds for a new cathedral, the preoccupied clergyman neglects his loving wife Julia (Loretta Young) until divine intervention is the only thing that can save their failing marriage. But the handsome and powerful angel (Cary Grant) that is sent in answer to the clergyman’s prayers has a mind of his own, and teaching mortal Henry an immortal lesson in romance isn’t the only surprise he’s got up his wing!

This is a true classic, with enough magic and charm to warm the Grinchiest heart. The recent remake, “The Preachers Wife” doesn’t come close to touching the original! The fact that I’ve had a life-long crush on Cary Grant has nothing to do with my avid recommendation of this movie either. 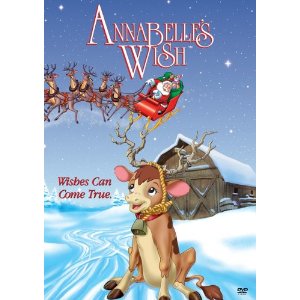 When Annabelle the calf is born on Christmas Eve, Santa comes and gives all the barn animals a special gift: they can talk on Christmas Day! Annabelle is good all year long and decides to ask Santa for a special wish the next year — to fly with his reindeer! But when Billy needs her, she postpones asking for her special favor … at least for a while.

This touching story has many lessons, the best of which is the beauty of unconditional love.

[This movie might be hard to find. It’s not available on Netflix, and the price on Amazon is totally insane. If it comes on TV, record it. If you know someone who has an old copy of this DVD, ask them if you can come over and watch it with them.]

5. “Eloise at Christmastime” with Julie Andrews 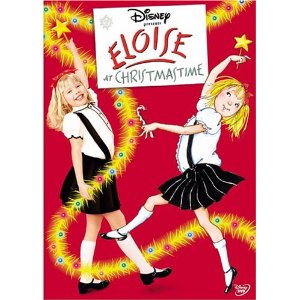 Yes, that Eloise, and of course…The Plaza. This delightful story is set just before Christmas, when Eloise learns that Rachel, the daughter of Plaza owner Mr. Peabody, is returning after a long absence to marry mystery man Brooks Oliver. Eloise insists on helping with the Yuletide nuptials, all the while scheming to get Rachel, the true love of her best pal Bill (a free-spirited hotel waiter), together instead. Through all her shenanigans, Eloise infuses everyone with holiday spirit, especially her beloved Nanny, played “rawther” marvelously by Julie Andrews.

Seeing The Plaza resplendent in its holiday finest never fails to get me in a festive mood. Add zany Eloise and her wacky Nanny on top of a pull-at-the-heart-strings love story, and any bah-humbugging vanishes instantly.

[This movie isn’t available on Netflix either, but it is available on Amazon for a very reasonable price (under $10.00).]