Thousands of people around the world are marching to raise awareness about the devastating impact of the ivory trade. Unchecked it will wipe out the wild elephant populations by 2025.

Every 15 Minutes an elephant is killed for its ivory…

The International March for Elephants was organized by The David Sheldrick Wildlife Trust (DSWT) through their iworry campaign, taking place around the globe. If you are unable to join the march, there are other ways you can make a difference. Every day of the year.  [image from DSWT iworry program] 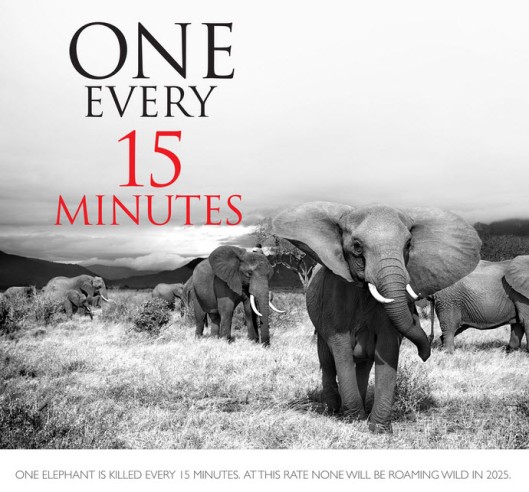 Launched in September 2012, the iworry campaign has attracted worldwide backing calling for a complete ban on the ivory trade.

It’s simple. When the market for ivory disappears, the killing for it will stop.

Recently, the United States and China laid the groundwork for a ban on all ivory trade. Some states, such as California, have also enacted bans on importing ivory. Progress is being made, but there’s still a long way to go if we are to save these majestic creatures from extinction.

You CAN Make a Difference!

The truth is, each of us can make a difference. Supporting an organization that is actively engaged in preventing poaching — one that also rescues orphaned elephant calves that are victims of poaching — is a way those of us who are continents away can make a significant positive impact.

The  The David Sheldrick Wildlife Trust (DSWT) has been rescuing, rehabilitating, and returning orphaned elephants to the wild since

1977. The organization grew out of the family’s passion for Kenya and its wilderness. Today, the David Sheldrick Wildlife Trust is the most successful orphan-elephant rescue and rehabilitation program in the world. It is also pioneering conservation for wildlife and habitat protection in East Africa.

Dr. Dame Daphne Sheldrick D.B.E founded the organization in 1977 to honour the memory of her late husband, David Leslie William Sheldrick MBE, the founding Warden of Tsavo East National Park. Since then, the lives they’ve saved is nothing short of astounding.

It’s one thing to bang out a blog post, but my words won’t mean a thing unless I back them with action. I am happy to be fostering KAMOK and SIMOTUA, orphaned baby elephants at the David Sheldrick Wildlife Trust. Fostering is only $50.00 US dollars a year. I know people who spend more than that in a month at Starbucks. It’s rewarding to know that you’re making a difference in a huge way…in the life of an individual elephant, as well as the protection species as a whole.

The following video of Kamok’s rescue demonstrates the level of care this organization extends to each and every animal in its care.

For information on how you can foster an orphaned elephant or rhino at the David Sheldrick Wildlife Trust, go here.

You can also help in the following ways:

Together we can make a difference!

6 thoughts on “The International March for Elephants ~ Ban Ivory, Save a Species”