It’s almost Halloween. The one day of the year costumes are acceptable … and in some places even expected or required.

The typical question we ask one another at this time of year is, “What are you going to be for Halloween?” This translates to:

What type of costume are you going to wear? 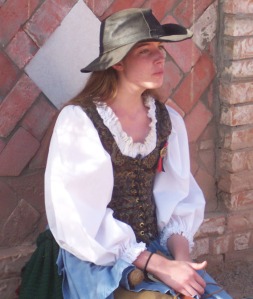 What we choose to wear defines the character we are impersonating on Halloween. By donning the costume we become the character.

I never thought much about that innocent Halloween question in terms of character definition in my writing. Until now. The concept translates directly into how we build characters in fiction.

A person’s manner of dress conveys a lot about their personality … quirks, insecurities, likes, and dislikes.

Clothes styles can also be used to reflect the time and place in which a character lives, or how they view the world. [image from morguefile]

— there is no way you’d think the people (?) in these two photos are anywhere near similar in anything  judging from their style (?) of dress.

The old saying, “Clothes make the man” — or the monster, as the case may be — is directly applicable when it comes to fictional characters too.

Hollywood clued in on the secret of costume = character from its beginning. And they still pretty much own the market in that department. I recently got a tour the Universal Studios Costume Department in Los Angeles, so I can vouch for that fact.

I guess I’m thinking about this sort of thing a lot lately, because I’m in the early stages of a new project. Which means defining the nuances of character — through the clothes they wear — as well as by dialog and action. Props provide another means for defining character, but I’ll save that rather large topic for another blog post.

So…what are you going to BE for Halloween?

Maybe something that incorporates some — or all — of these…?