You don’t become a hero by being normal… 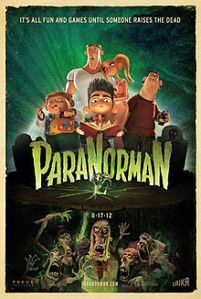 A misunderstood boy, takes on ghosts, zombies and grown-ups to save his town from a centuries-old curse.

OK. I admit that logline sounds like a dozen other stories in both film and fiction. But I assure you. ParaNorman it’s not normal, in any sense of the word.

I may not be a zombie aficionado, but from what I’ve seen and read, most zombie stories aren’t “delightful”. Which is how one writer friend described ParaNorman. And I totally agree.

Most zombie stories aren’t meaningful in a heartfelt way either. ParaNorman most certainly is, with a dash of macabre for spice. Add a little Joss Whedonesque humor. Toss. Let rest for five minutes before serving. And voila! A Zombie Comedy with heart.

Yes, a Zombie Comedy, or ZomCom. A new genre. Now that’s what I call pushing the envelope!