Today I have special guest author Shay Fabbro on board to share her secrets about writing in an authentic YA voice. It might seem easy peasy when you’re 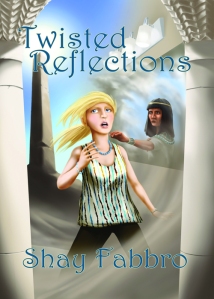 reading a great YA novel, but just try it sometime. You’ll find out it’s NOT. Take notes folks. Because Shay’s more than earned her street creds:

Shay’s new book, Twisted Reflections, just released and is the second in The Adventures of Alexis Davenport series.

Stop back this Friday for a chance to win a FREE autographed copy of Dangerous Reflections and Twisted Reflections!

Take it away Shay…

For me, writing dialog for adults is so much easier. I am, after all, an adult (alright
you guys, quit yer laughing!) so this sorta makes sense. But you can’t write dialog in an adult voice and connect with YA readers. You gotta speak their language, get in their heads and put on paper the way their thoughts sound in their own minds.

The problem is this: if I were to actually write dialog exactly how young people talk nowadays, it would have to be rated R and couldn’t be marketed as YA. I spent a lot of time listening to conversations carried on by teens who had no idea they were being observed as part of a scientific/writerly experiment. The results were not all that shocking to me: teens have filthy little mouths and use language that isn’t appropriate for a YA audience to read. They throw out curse words as well as derogatory comments that I can’t even write down.

They, like, also, like use the word “like”, like a lot! And it’s like so annoying and makes me, like, want to shoot myself. Even writing that was painful. As a professor of college students, it STUNS me how many young people can’t formulate a sentence without throwing in the word “like” after every other word. I think it’s the new “umm”.

So while I totally understand the need to write realistic dialog for a teen audience, I am restrained by the very rules that exist to make YA books appropriate for age 13 and up. Most moms wouldn’t want their teen reading something that has the F-word or the n-word thrown in every time one of my characters opened their mouth. I had to find a fine line between realistic and age-appropriate. My YA series, Adventures of Alexis Davenport, has some mild language (damn, hell, etc) and some mild violence but I think it’s totally fine for teens to read. No worse than Harry Potter.

Now as for the “like” every other word…*sigh*. I had to take s stand as a girl, as a nerd, as an educator to refuse to write characters that sound like idiots. I just couldn’t do it. I think it degrades those teens that are smart enough to construct a complete sentence and sound logical and mature. I would rather write dialog that makes my readers smarter, not encourage them to continue to like, talk like idiots.

So what are your thoughts? Should writers be completely genuine when it comes to teen dialog or is there some room to improve (refusing to use idiotic words)?

Leave your comment below for your chance to win one of two FREE autographed paperbacks of Dangerous Reflections or Twisted Reflections!

You can connect with Shay in the following ways:

6 thoughts on “YA Voice Dilemma ~ by Guest Author Shay Fabbro”