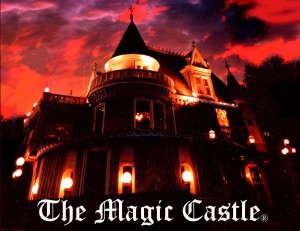 Yes, a real Magic Castle nestled against the Hollywood hills … a private clubhouse for the Academy of Magical Arts, Inc. It’s secret because you have to be as talented as Houdini to get in, or know someone who is. Seriously. You have to be a professional magician or know one to be admitted to the mystical fortress … which is actually a vintage Victorian, but whatever. The strict admission policy is a reflection of the professionalism of an organization devoted to the advancement of the ancient magical arts. No sideshow amateurs here. This is the real deal folks. Trust me on this one. I’ve been inside!

How did I rate an invite to this exclusive club?  Nothing as glamorous as

befriending a magician, I’m afraid. I stumbled upon the Magic Castle before I was old enough to get in (21 because alcohol is served), and was obsessed with the place ever since. Finally, I discovered a local  B&B who’s owner was a member at the Magic Castle and he treated his guests to reservations. I couldn’t believe my luck! The price for the elusive invite was well worth it. The magicians I saw perform were AWESOME! The seating for all the shows is intimate … and it was all MAGIC!

The B&B changed hands, but now there’s a Magic Castle Hotel just a couple of blocks from the castle that can hook you up with a magical invite when you stay there. As easy as Bibbity-bobbity-boo!

A Glimpse of Magic…

What’s magic for you?

Come on, spill. You know you want to!