I was excited about attending a recent concert at the Hollywood Bowl (Joshua Bell and Friends), in Los Angeles, and couldn’t help sharing the news with whoever would listen. I was shocked when two different people asked, “What’s the Hollywood Bowl?” It was all I could do not to say, “Are you kidding?” I grew up on Southern California. But still. The Hollywood Bowl is an American icon, and has been used as a setting in films and television for years.

I would have dismissed one person not knowing about The Bowl. But two was a cry from the universe to write this post. Attending a performance at the Hollywood Bowl is a bucket list kind of thing.

Everything is better at the Bowl. It just is…

From Rustic to Iconic

The Hollywood Bowl is the largest natural amphitheatre in the United States, located in the Hollywood area of Los Angeles, California. When the Bowl opened to the public in 1921, it was used in its natural state with only makeshift wooden benches for the audience to sit on, and a simple awning strung up over the stage.

The popularity of the venue grew with the boom of the film industry, and by 1926 designs for a permanent stage were underway. For the 1927 season, Frank Lloyd Wright‘s son Lloyd Wright built the first of the iconic shell structures. By 1929, the Allied Architects built a shell that stood on the site until 2003. A larger and acoustically improved shell debuted in the 2004 summer season, incorporating design elements from the 1929 shell and the first shells designed by Lloyd Wright. 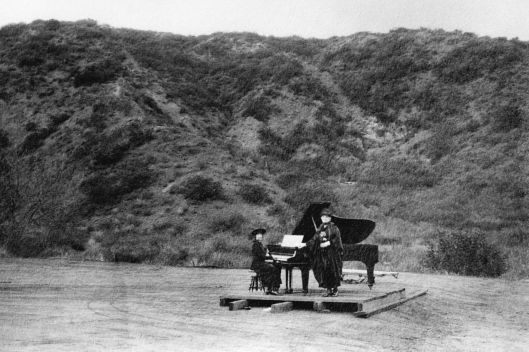 The two women in the photograph above are performing on the barn door (1920) to test the acoustics of the site, the first known musical event at the Hollywood Bowl. The barn door was placed approximately where the band shell was built.

Classical to Rock and Roll

A common misconception about the Hollywood Bowl is that it caters solely to the classical music crowd. The LA Philharmonic and Hollywood Bowl Orchestra both make their home there, but each season hosts productions from a wide variety of musical styles. For a complete list of upcoming performances, visit the Hollywood Bowl website. 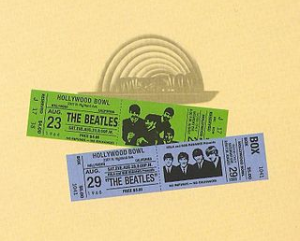 Rock and Roll has a long history at the Bowl. In fact, The Beatles appeared at the Hollywood Bowl on April 23, 1964, just months after their US debut. Tickets for the show sold out in 3 1/2 hours, with the only sales being through select ticket offices, no online sales. Over 18,000 people packed the Bowl that night. To keep The Beatles safe from the overzealous fans, a smooth getaway scheme was devised. A decoy limo was used to attract the fans, while the band members slipped away in a nondescript Plymouth Valiant. In later appearances at the Bowl, a Brinks armored truck was used to escort The Beatles to and from their hotel to avoid a panic situation.

The screaming crowd at The Beatles first concert was so loud that no one could hear the music. However, it was recorded (as were their two Bowl concerts in August of 1965) and later released as an album under Capitol Records (US) and Parlophone (UK). [image: Wikipedia]

The Beatles 1964 concert became the bench mark for rock and roll concerts at the Bowl, but many famous rockers have played there before and since. To watch The Beatles performing at the Hollywood Bowl on April 23, 1964 go here.

One of the most engaging customs at the Bowl is the tradition of pre-concert picnicking. Some of the surrounding picnic areas open as early as 4 hours before each concert. Tables are available on a first-come, first-served basis. Those in the private boxes nearest the stage, can choose to enjoy a luxurious dinner served to them by professional wait staff. Whether it’s a casual picnic or box dining, you can’t beat the delightful al fresco dining under the stars. For more information, see the Hollywood Bowl website.