Santa Claus, the cultural icon we know today, was made in America. I knew about the real Saint Nicholas, but was surprised to discover that the “jolly ol’ guy in the red suit” was an American literary creation and marketing manifestation. 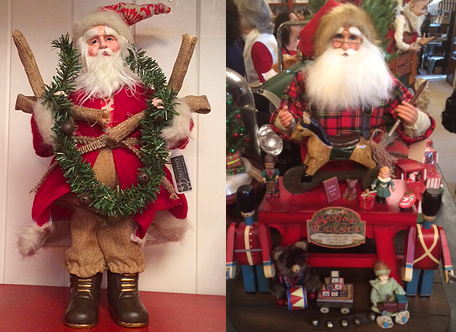 Many faiths share the custom of gift giving around this time of year. Which is why it’s kind of amazing that the predominant icon for the season is a fictional character created in America in the late 19th and early 20th centuries. [PC: Moi, taken at Filoli]

St. Nicholas was a 4th-century Greek saint from an area that is now

Turkey, who had a reputation for putting coins in the shoes that were left out for him. As the patron saint of children, he was most often associated with giving them gifts.

One of the many generous deeds attributed to Saint Nicholas was providing dowries for the daughters of three impoverished families, so the girls could wed. In those days, a woman without a dowry was unlikely to marry, and then her fate was often to be sold into slavery (read: prostitution).  [Public Domain: Saint Nicholas]

Early Dutch settlers brought Sinterklaas to America, and the name first appeared in print in 1773 as “St. A Claus.” However, it was not until the 19th century that the Americanized Santa Claus came into being.

Washington Irving gave Americans the first detailed information about the man we would come to know as Santa Claus. In 1809, writing under the pen name Diedrich Knickerbocker, Irving described the St. Nick’s arrival on horseback each year on the Eve of Saint Nicholas (December 6th).

A few years later, Clement Clarke Moore created the Americanized Santa Claus in his 1823 poem A Visit From Saint Nicholas—today known as The Night Before Christmas. Moore gave Santa’s reindeer names, described Santa’s mannerisms, and even introduced his leaving your house by up the chimney.

drawings for the Christmas issues of Harper’s magazine from the 1860s to the 1880s were of a rotund man with a white beard, wearing a red suit. Nast even added the details for Santa’s workshop at the North Pole and his list of good and bad children of the world. [Public Domain: Thomas Nast illustration of Santa Claus] 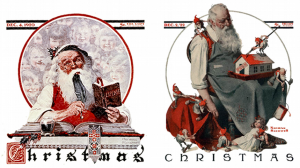 Clause with his many Santa themed covers for the Saturday Evening Post. Then in the 1930’s, Coca-Cola created illustrations for an advertising campaign that turned Santa’s red suit into the cultural icon it is today.

Rudolph (the ninth reindeer) with his red, shiny nose, was invented by an advertising writer for the Montgomery Ward Company in 1939. [Public Domain: Two covers for the Saturday Evening Post by Norman Rockwell]

With Santa Claus a predominant image in national media, children across America began

to write him letters. The letters to Santa piled up at post offices, where some postal workers took it upon themselves to answer the letters and even fulfilling the requests.

Hollywood played on this theme in the 1947 classic, Miracle on 34th Street, cementing the image of the jolly ol’ guy in the red suit as a “very real” holiday icon.

To make Santa and his workshop even more real, the USPS provides a service where you can get a North Pole cancellation stamp on a card or letter. I’m not kidding.

For more about how writing letters to Santa became a standard practice, read Alex Palmer’s A Brief History of Sending a Letter to Santa in Smithsonian Magazine.