The ending of one year—one complete circle of our planet around the sun—and the beginning of another. Milestones in the passage of time cause us to reflect on our past and speculate about our future. Time.

What is time, anyway?

A concept humans cling to in order to create structure from the chaos of the universe. Einstein proved time is relative. At the speed of light, time stops.

Light is Time is an art installation developed by Tsuyoshi Tane of DGT Architects. Featuring 80,000 suspended main plates—the basic component of a watch—to create the illusion of frozen time that people can actually move through. 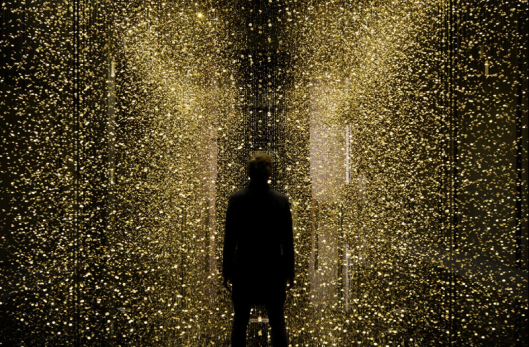 If there were no light, then there would be no time. In the 20th century, mankind digitized time, measured it and continued to economize our time, until eventually we forgot about its relationship with the essence of light. Without light we never would have had the wonders of the universe, the richness of our planet or the joy and pleasure of our lives. “LIGHT is TIME” — the manifestation of light’s return to time — is our great challenge of the 21st-century. – Tsuyoshi Tane (DGT)

Take a walk through the exhibit in the following virtual tour.