The sweet innocence of childhood should be cherished and preserved for as long as possible, but shielding children entirely from harsh realities doesn’t do them a service. There are levels of truth. The youngest readers shouldn’t be unnecessarily exposed to gritty topics. However, there are plenty of stories that address tough topics in a way that builds empathy and understanding.

The two books I want to focus on here broach the topics of discrimination and homelessness in a gentle way.

The Bat Boy and His Violin

By Gavin Curtis, Illustrated by E. B. Lewis 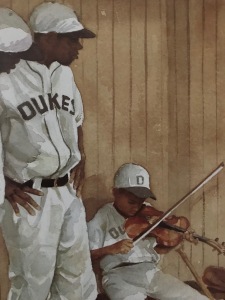 Reginald loves to create beautiful music on his violin. But Papa, manager of the Dukes, the worst team in the Negro National League, needs a bat boy, not a “fiddler,” and traveling with the Dukes doesn’t leave Reginald much time for practicing. Soon the Dukes’ dugout is filled with Beethoven, Mozart, and Bach — and the bleachers are filled with the sound of the Dukes’ bats. Has Reginald’s violin changed the Dukes’ luck—and can his music pull off a miracle victory against the powerful Monarchs?

The Negro Leagues were United States professional baseball leagues comprised predominantly of African-Americans, beginning in 1920, with a final season in 1951. On the surface, this story is a view into racial discrimination and segregation in the United States prior to the Civil Rights movement.

On a deeper level, this story addresses the all too frequent discrimination of the arts over sports. Reginald serves as a heroic role model, in that he honors his father’s wishes without giving up his true passion. In the end, father and son strengthen their bond through their acceptance and new-found appreciation of one another.

E. B. Lewis won the Coretta Scott King Honor for Illustrations for his rich and nuanced watercolors that enliven this moving, heartfelt story.

Jackson and his family have fallen on hard times. There’s no more money for rent. And

not much for food, either. His parents, his little sister, and their dog may have to live in their minivan. Again.

Crenshaw is a cat. He’s large, he’s outspoken, and he’s imaginary. He has come back into Jackson’s life to help him. But is an imaginary friend enough to save this family from losing everything? [Synopsis]

Katherine Applegate tackles a tough topic in Crenshaw, shedding light on the realities of hunger and homelessness. As difficult as this topic is, Applegate artfully infuses the story with empathy and lighthearted humor. I was sold with the opening paragraph:

Told from the viewpoint of nine-year-old Jackson, we watch as he shields his younger sister from the terrifying reality of their family’s financial uncertainty, and feel the shame that threatens to cut him off from his best friend. Applegate masterfully shows how the family’s problems play out through Jackson’s eyes, and finally resolve in a safe and satisfying ending that is true to the story’s premise.

The tone is warm and, occasionally, quirkily funny, but it doesn’t sugarcoat the effects of hunger and vulnerability. This novel adds a middle-grade perspective to the literature of imaginary friends and paints a convincing and compassionate portrait of a social class―the working poor―underrepresented in children’s books. ―The Horn Book, starred review

What books that touch on tough topics
would you recommend for young readers?