The cats are out of the bag. And to think it happened in Fantasyland… There’s more to their covert kitty fluff than gratuitous sass and snark, though. Disneyland cats are working cats-members that provide a valuable function in the Happiest Place on Earth.

Several years ago Taylor Roberts, a freelance writer, glimpsed a cat darting across a path in Fantasyland and snapped a picture.

With Roberts’ dry humor combined with photos of the covert cats, Disneyland’s secret cats-members skyrocketed to social media stardom. Articles about Disneyland cats were featured in the Los Angeles Times and KTLA. Blog posts were written about them, like my 2015 post, The Cats Behind the Mouse. (Giovanni, Disneyland California Adventure, PC:Elizabeth Fais)

NOTE: Taylor Roberts started the Disneyland Cats accounts on Twitter and Instagram, but it now appears those accounts were taken over by someone else. It’s not uncommon for popular accounts to be purchased and transferred to new owners.

In a theme park inspired by the world’s most famous mouse, it’s the cats of Disneyland who have the run of the place. —Los Angeles Times

As Becky so proudly flaunts, atop the roof of the Mexican eatery in Frontierland, Rancho del Zocalo (PC:Elizabeth Fais).

All the media hype continued to keep the cats’ indisputable value to the daily operation of the Park a secret, though.

Disney parks pride themselves in cleanliness. So it’s a little embarrassing that cats are necessary for the Disney “Mouse” squeaky clean image. In truth, the cats play an important role in keeping rats and other vermin out of the Park.

Disneyland’s cats have been behind-the-scenes cast members since the Park opened in 1955, infiltrating the grounds from the surrounding orange groves of the time.

The cats at Disneyland are feral, which means they are happy living and hunting outdoors, and prefer to stay away from people.

I became interested in the cat population at Disneyland, because of the work I do with feral cats in the San Francisco Bay Area. I’ve made several trips to Disneyland to research the cats. On one trip, I talked with the manager of the feral cat program and here’s what I learned:

Something must be done…I mean sung! The “underdog story” is popular in the Disney Classics library. 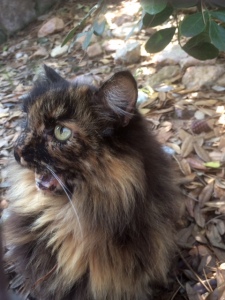