When a friend asked if I’d go with her to a concert featuring violinist David Garrett (in San Jose last Tuesday), I expected an excellent show. After all, I’d heard Garret’s classical album, Legacy; proving his world renowned talent as a classical musician. 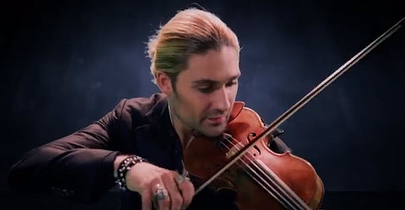 What I didn’t expect … was to be totally blown away…
Along with that box everyone talks about thinking outside of.

His show — Music, named after his latest release — was genre busting in every possible way. From the wide range of music, to the orchestration and technological presentation. He played everything from Beethoven, Queen, AC/DC, Bach, Brahms, The Beatles, Brazilian … you get the picture. All backed by a rock band. Mindblowingly awesome!

I am inspired by any artist (in any medium) who refuses to follow the customs of their group and sets new standards of excellence. The Maverick … who sees beyond the rules, envisions explosive possibilities, and then brings them to life. What I love most is Garrett’s all-inclusive approach to his art…

He draws from “everything” he hears, then filters through the possibilities and permutations to create something fresh and new. He doesn’t see one genre as “less than” and another as “superior”, he embraces all … even technology … to drive creativity to new limits. Check out the video below and see for yourself.

Garrett’s performance turned my head around in more ways than one. It made me take serious look at my approach to my craft, and ask how I can make my writing and my stories fresher. What possibilities haven’t I considered? What potentials should I investigate? What can I do that hasn’t been done before?

Mavericks in Fine Art and Filmmaking

Every medium has its mavericks. Unfortunately, they are few and far between. Pablo Picasso and Joss Whedon pioneered new ground in the fine arts and filmmaking, respectively.

Pablo Picasso was a maverick in the fine art world. He trained classically, painting in the realistic manner of the time through his childhood and adolescence. After that he experimented with different theories, techniques, and materials. His unique vision helped found the Cubist movement and made him one of the best-known figures in 20th century art.

Joss Whedon is a contemporary screenwriter, producer, and filmmaker who used his “genre salad” approach to story to create some of the most memorable TV series of our time. Whedon is best known for his TV series Buffy the Vampire Slayer, a teen-angst dramedy with vampires, monsters, and hot chics with super powers who kickass and take names. Whedon stretched the genre envelope even further with the TV series Firefly, a space western drama. And that’s just two of his remarkable genre busting accomplishments.

The question we should all be asking ourselves is…

How can I turn my [type of creative work here] on its head, spin it around, and create something new?

In the following video, as in his live performance, David Garrett puts a fresh spin on Coldplay’s Viva La Vida, using technology to push the creative edge even further. Yes, he’s playing all the tracks in real-time (on a Stradivarius!), thanks to technology. Pretty awesome.

No powder throwing ravers at the live concert…
Is anyone else concerned about the violin in that scene?
Hopefully, that’s not the Strad!

6 thoughts on “Creative Courage ~ Blowing Away “The Box””