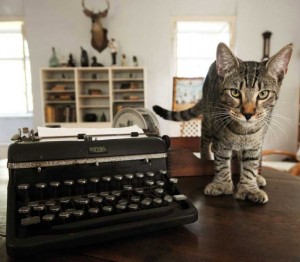 Yes. It’s true. Hemingway, one of the manliest men to ever hit the literary scene loved cats. A plethora of them. 40-50 six-toed (polydactyl) cats still roam his Key West, Florida estate.

I don’t mean to dis The Man, nor the furry family of six-toed cats he adopted. Quite the opposite. I consider the “Cat Lady” title a badge of honor. It means the person is a kind soul who helps animals. And let’s face it. We could use more kindness in the world. Being a “Cat Lady” is more about kindness than the number of cats in a person’s care. Photo of a six-toed cat next to Hemingway’s typewriter at the Earnest Hemingway Home and Museum.

One of Hemingway’s first feline companions was a six-toed white cat named Snowball, which was given to him by a ship’s captain. 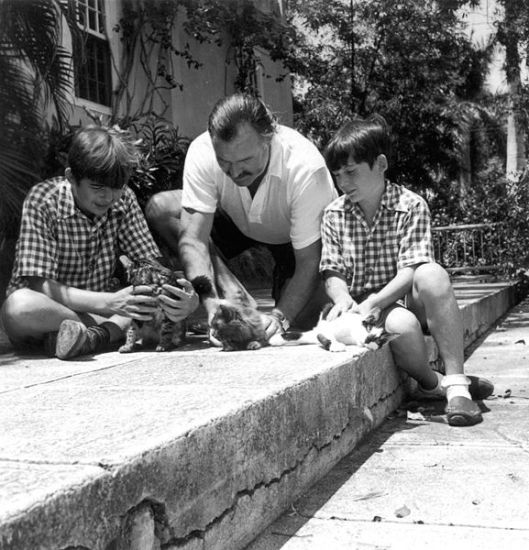 It is thought—though not proven—that some of the many cats who currently live on the Hemingway Home and Museum grounds in Key West could be descendants of Snowball. After all, Key West is a small island. Which makes it entirely possible that more than a few of the cats that inhabit the island are related. Photograph of Hemingway with sons Patrick and Gregory with kittens, from Wikipedia.

What is a polydactyl cat?

Normal cats have five toes on each front paw and four toes on each hind paw. A polydactyl cat can have as many as eight toes on their front and/or hind paws. Polydactyl cats are not a particular breed. The six-(or more)-toed trait can appear in any breed, Calicos, Tabbies, Tortoise Shell, etc. They vary in shapes, sizes, colors and personalities. What they have in common is a genetic mutation. 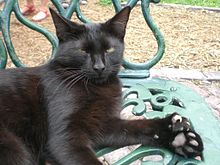 Coast of North America (in the United States and Canada) and in South West England and Wales. Throughout history, polydactyl cats have been popular as ship’s cats. their extra toes aid them in climbing and hunting thereby helping to control rodents on ships. Being good “ship cats” contributed to the spread of polydactyl cats. Photo of one of the polydactyl cats at the Ernest Hemingway Home in Key West, Florida. This particular cat has 26 toes!

No one knows for sure whether the polydactyl genetic trait originated in New England, or was brought there from Britain. However, there is evidence that the polydactyl trait spread as a result of cats that were carried on ships originating from Boston, Massachusetts. The prevalence of polydactyl cats in various other ports correlates with the dates those ports first established sea trade with Boston.

The Key West, Florida home Ernest Hemingway and his wife Pauline purchased in 1931 was originally built in 1851. The Spanish Colonial style mansion was in a serious state of neglect when the Hemingways took ownership. Luckily, they saw beyond the disrepair to the grand architecture. The Hemingways immediately took on a massive restoration and remodeling that turned the home—built from rock excavated from the property—into the National Historical Landmark that thousands of tourists visit and enjoy.

I don’t know about you, but visiting Hemingway’s Key West home is on my bucket list, for a number of reasons. If you’d like to learn more about the estate, click the following links for information on the Hemingway home, gardens, tours, and of course … the cats. Image from Wikipedia. 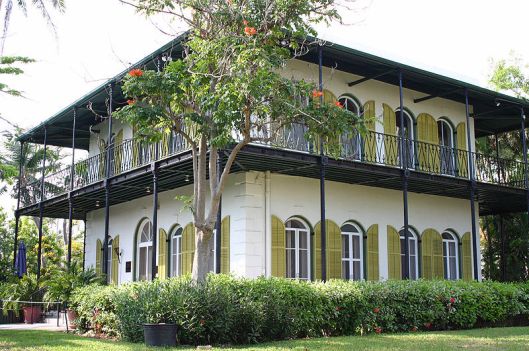