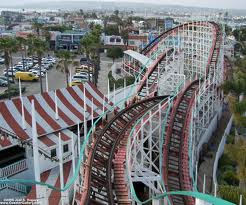 A delectable post on All Things Summer (by Tami Clayton) set me thinking… What’s my  most quintessential summer experience? And because I’m a total adventure geek, the answer is two words: Roller Coaster!

My love affair with roller coasters is limited to the historic kind, however. Sorry, folks. I’m not a fan of the super-thrill-whirl-and-hurl roller coasters of today. I much prefer the sky-high rickety old wooden structures from the previous century. [photo credit] Maybe that’s because I grew up in a small town in Southern California, that was a two-hour drive from San Diego.

That’s where my adrenaline-ride love affair began … at Belmont Park in Mission Beach. Because THE BEST DAY EVER, was a trip to the beach and riding the roller coaster. Oh yeah, and a chocolate milk shake was part of that package too! 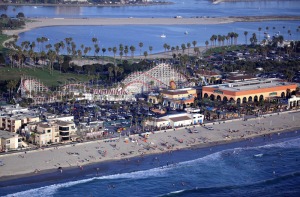 Luckily, a group of citizens formed the “Save the Coaster Committee”, intervening in the demolition of the Giant Dipper, and had it designated as a National Historic Landmark in 1987. The coaster was restored, to the tune of two million dollars, and re-opened on August 11, 1990.

The Santa Cruz Boardwalk Giant Dipper is the twin sister of the San Diego Giant Dipper. And I can say from first-hand experience, that the Santa Cruz coaster is every bit as much of a thrill ride as its sister!

The Santa Cruz Giant Dipper opened on May 17, 1924, and is the fifth-oldest roller coaster in the United States today. [photo credit]

Over 55 million riders have ridden the coaster since its opening. The United States National Park Service recognized the Giant Dipper as part of a National Historic Landmark also covering the nearby Looff carousel in 1987. [Wikipedia]

The Santa Cruz and San Diego Giant Dippers are the only remaining coasters on the West Coast built by the noted coaster builders Prior and Church.

But hang on to your hats folks …  there’s one coaster that deserves a mention, even if it’s not “officially” historic …

Walt Disney was inspired to build a miniature of the Matterhorn at his park in Anaheim, while filming the live-action drama “Third Man on the Mountain” in Zermatt, Switzerland (1956). Under Walt’s direction, his team of Imagineers recreated the mountain to scale (exactly 100 times shorter than Switzerland’s 14,700-foot-tall original), and designed special tubular steel tracks for the coaster to simulate the smooth motions of bobsleds gliding over ice. The ride contains two separate tracks that intertwine with each other as they descend the mountain, another stroke of genius by the man with the magic. The ride opened for the first time in 1959, and has been a favorite ever since.

The Matterhorn underwent its first major renovations in 1978, with the significant addition of the Abominable Snowman. The Audio-Animatronic creature roars at passing bobsledder as he glares with red glowing eyes. As if to say, “Get the hell off my mountain!” Uh, huh. Like that’s really working, Big Guy. I don’t know about you, but he’s one the main draws for me on that ride. 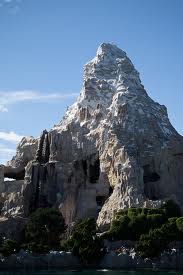 The Skyway attraction, the buckets that passed through the middle of the mountain, were taken down in November 1994. And in 1995 the Frank Wells Lost Expedition tribute was added in honor the late Walt Disney Company President, who was an avid mountaineer.

The silhouette of the Matterhorn rising above Fantasyland is iconic. Yet oddly enough, Disneyland (in Anaheim, California) is the only Walt Disney park in the world with a Matterhorn ride. I’m not sure why. If anyone out there knows the “official” story, I beg you … please share.

Never ridden the Matterhorn Bobsleds; can’t make it out to Anaheim for face time with Mr. Abominable? No worries!

Check out the video of a real-ride experience … lederhosen are not required … but screaming is highly encouraged.

what Experience always says “summer” to you?